Hunch is a very interesting website that created a proprietary platform called “Taste Graph” that has you answer several different questions from different categories and uses a predictive model to analyze your tastes. See their infographic for more details on their process.

There are thousands of questions that have been answered millions of times, but it’s their “You Vote What You Eat: How Liberals and Conservatives Eat Differently” observations that really got my interest. (See posted infographic.) They state that almost 400,000 respondents answered whether they were Liberal (42%), Conservative (17%) or Middle of the Road (41%) between 2009 and 2011. That alone may cause some questions because of skewed sample sizes, however, in statistics, a study can still be statistically significant without capturing equal sample sizes (although they don’t divulge their math). Without getting too much into the weeds with statistical significance, they do claim a 90% Confidence Interval. They do not state the level of probability (chance that they are wrong) and since certain errors directly correlate to sample sizes, there are some very strong arguments to invalidate their observations. They do state in fine print that “correlation doesn’t equal causation.” Excellent. Play along with me and let’s assume that their study is valid. They then crossed those answers with dozens of other questions that had over 80+ million responses from 700,000 Hunch users. This can be another statistical error, selection bias, where the audience you’re studying is not representative of the population you are making your conclusion for. There are over 315 million Americans, so not everyone is on the Internet, or allows Hunch to get access to their Facebook page (what some of their apps require you to do to acquire data based on “Likes” and answering surveys) or samples do not correct for age, race, economic status (since these individually will skew results since there are significant dietary habits associated with each), etc. Basically, the people answering these questions are representative of Hunch users, not US residents. Again, lets just play along. The results illustrate that Liberals and Conservatives differ when it comes to certain foods. For example, Liberals are 92% more likely to eat fast food rarely or never and Conservatives are 64% more likely to eat fast food a few times per week. There are some pretty interesting findings here like Liberals prefer thin crust over their Conservative counterpart’s love for deep dish. Their common ground findings are also interesting if not funny, like both prefer their sandwiches cut diagonally! I saw this infographic during an election cycle so Red States and Blue States were always in the news. And then it hit me when I saw the this CDC map of obesity: 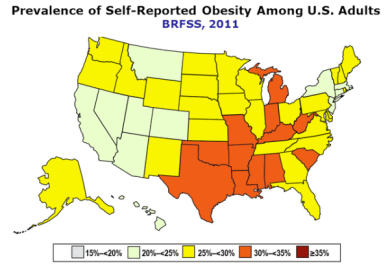 Compare that map to this one from the New York Times 2012 Election: 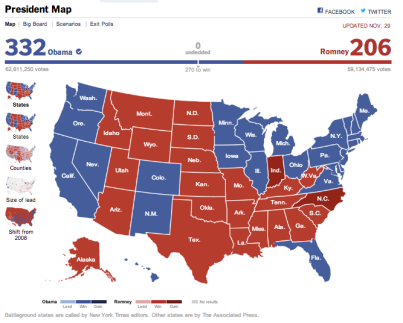 Do you see what I see?

Hunch missed what the CDC, epidemiologists and public health professionals have known all along; that there are regional differences in diets. Also, diets in urban settings differ from diets in rural settings, regardless of political ideology. Same goes for race, age, sex, and religion.

For example, people in the South have a unique diet based on cultural, tradition, climate, race, religion, etc. There just happens to be more Conservatives living there. Their political affiliation cannot affect diet. If I chose to be a member of another political party, I wouldn’t start eating differently.

There is still a lot of overlap, so don’t make gross generalizations. I know conservatives and liberals that love a good deep dish as much as a thin slice of pizza here in liberal Chicago.

There is research being done on this and preliminary findings do show that race and region do affect dietary patterns.

For now, just have fun with infographics like these and do not use them to communicate anything, except for humor across the aisle!